Online users have grown from 780 million as of January 2004 to 3 billion by January 2014, of which 1.4 billion are on Facebook, revealed Jumana Antara, Manager of Corporate Communications of Facebook for Middle East, Europe, Russia and Africa.

Speaking on the first day of the Arab Media Forum (AMF) workshop, titled, ‘Facebook: The New Communication Era’ , one of many taking place in the two-day event at Madinat Jumairah on Tuesday, Jumana gave startling figures of online presence saying the channels serve to complement the traditional media, but called for selective use of the materials. 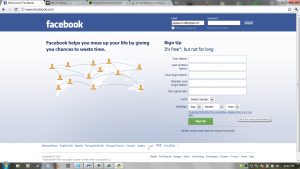 “If I don’t have business with any news feed, I don’t interact with it,” she told a packed space under a larger tent of Media Walk at the venue. The AMF 2015 is being attended by more than 2,000 delegates from the region and the wider world. A third of the speakers this year are foreign experts. In keeping with the ‘2015 Year of Innovation’ in the UAE, AMF 2015 features two key new concepts – The Media Walk which features a brief history of media; and Davos-style 20-minute sessions sponsored by Nakheel. Additionally, AMF 2015 also features workshops sponsored by DP World.

Jumana shared some pictures depicting how fast the online presence is spreading. Two contrasting photos were taken at the same venue during the consecration of Popes in the Vatican. The first picture was taken in 2005 during enthroning of Pope Ratzinger and there were no mobile phones used to cover the event whereas that of 2013 when Pope Francis was assuming Papacy, there same room was glittered with iPads and mobile phones.

“It is here where the notion of Citizen Journalism is practically witnessed. It is no longer the affair of international news agencies to transmit news to consumers,” said Jumana.

Jumana emphasized “we need to focus more on the quality of the content shared in FB, because it has been a way of presenting the public opinion.”

Another photo showed a family gathered before television set “perhaps watching the ceremonies of a national day” something she said is now “getting relegated fast to history.”

The communications officer shared figures saying that of 1.44 billion Facebook users, over 80% of them which corresponds to about 1.1 billion have it on mobile phones.

Of 1.44 billion, 190 million are in the Middle East and Africa “and 167 million of them follow their Facebook interactions on mobile phones.”

She said 2.4 million Facebook users share pictures every minute “We at Facebook serve to make the world more open and connected. We want people to stay connected with their friends, family and discuss what goes on in the world as well as share and express what matters to them.”